A few weeks ago I wrote about seeing the International Space Station pass overhead and it included my failure to successfully take a photograph of it. Well, since then I have played with the settings on my camera and studied it almost to the point of actually getting the manual out. I have made a few more attempts to take some photos and this time I removed the lens cap. My Pentax Finepix s5600 camera is getting old. A newer fancier camera should be able to do a better job of this. I did manage to force it to take 15 second exposures with the aperture opened right up which at least lit the sky up well. 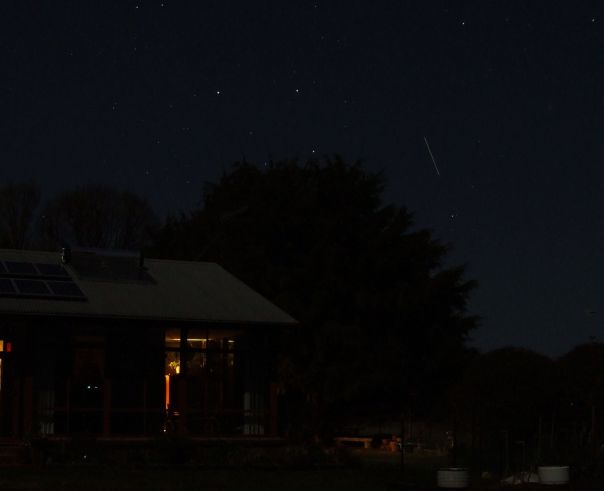 The streak across the sky is the ISS. The ISS didn’t appear as a streak in the sky, that is simply how the camera records it with a time exposure. The length of the streak indicates how far the ISS travelled in 15 seconds. What’s interesting in this photo is that the ISS was over southern Victoria when this photo was taken, which is about 1000 km (600 miles) away. The ISS would have been 400 km above Earth, so that makes it… allowing for the curvature of the Earth… umm, a long way away.

The ISS may not look that bright compared to the stars, but the stars have a full 15 second exposure while they are in one spot, while the ISS was moving resulting in its 15 seconds spread across that streak. It was actually brighter than all the stars in the photo.

The four stars at the tips of the Southern Cross can be seen above the tree.

Here’s another shot on a different night.

If you haven’t seen the ISS yet, jump over to Heavens Above, enter your location, check out the next pass in your area, go out to your backyard and become a Satellite Spotter it’s really cool.

Comments Off on Watching the International Space Station: Finally a photo

The home photographic darkroom of a 70’s school boy 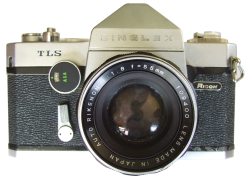 When I was in my early teens my mother was a keen photographer and I wanted to get in on the act too. I was given a second hand Ricoh SLR camera (pictured left) and occasionally some film. My mother had experience in a printery darkroom so I decided to buy some chemicals, photographic paper and a 30m (100 feet) roll of Kodak Plus-X Pan B&W film. I was set, except for one minor detail… I had no darkroom. I could dive under the blankets in bed at night with the lights off to load film into a canister, but printing photos needed a darkroom.

My sister had left home and left us with a small plywood wardrobe. It was quite small, only about 1.7m (5.6 feet) high, 1.1m (3.5 feet) wide and .45m (1.5 feet) deep. I made some measurements and found that the depth of the cupboard was the same as the base of the enlarger and also that of a wooden kitchen chair that I found. I thought converting the wardrobe into a darkroom would be really cool, after all the three investigators had a darkroom in their trailer (or caravan as we call them here), so I should have one too.

I carried the wardrobe out to the shed and started working on it. I pulled out its three drawers and the rest of the internal bits. I added three shelves in one end. The enlarger sat on the top one, developer and stop bath on the next and fixer and rinse water on the bottom one. A bucket of water sat on the floor for final a final wash. My mother had bought a second hand red safe light that I mounted along with a white light and switches overhead. A strip of old felt carpet ran around the edge of the doors to seal out any stray light.

I used a lot of cheap and second hand parts including the developer and fixer dishes which were kitty litter trays. I couldn’t quite stand up straight when I was inside, but I was usually sitting anyway. It lacked any form of ventilation including any vents as I couldn’t work out how to prevent light from getting in. Due to the lack of fresh air and rapidly escalating temperatures that occurred inside I could only work for short stints. Usually after each photograph was developed I had to open the door and gulp in some fresh air. At the time I thought it was pretty neat that I was able to keep it in my bedroom. It was probably a health nightmare and I certainly don’t recommend anyone doing this now. It may sound like a disastrous mix of CO2 and photographic chemicals and could well be, but I don’t think this was all that unusual at the time. Our school had a darkroom which was bigger but had no ventilation that I can recall. With a group of children in it, it too quickly became stuffy.

I took a lot of photographs but I regret never one of the darkroom.

There was something about the confined space that I found comforting. It was like my own little space where I could work without being interrupted or distracted, in fact I feel like converting a cupboard now. I could call it the escape pod.